As a painter who is most comfortable in an outdoor studio, I have in recent years found it a challenge to keep excited about working steadily indoors through the long dark days of winter. Occasionally I have participated in group-creative challenges. The 100 Day Project, found online at The100DayProject.com, is now in its 7th year and is primarily a rich source of stimulation and artist-centered communication. Initially, the 100 Day Project seeks to encourage an artist to be focused on a project for 100 days. Weekly updates provide words and images to stoke the fires. A theme is provided, this year it is “Secret Places.” But the theme, the media, the processes and the real-time committed by the artist are totally self-determined. It is also free! This year it was the theme that took hold of me.

This winter I changed my focus several times until the day my brain connected with some long under-used equipment in my studio. The idea came to me…could I reconnect with the art of relief printmaking in a way that was totally loose, or seemingly lacking in the confinement of purpose? That seems quite illogical at first, especially when one considers the lack of fluidity of the media! But it is not totally impossible considering what changes occur from the point of carving lines and shapes into a linoleum block and printing that inked block onto paper. This morning’s writing counts as studio time because I am now trying to make sense of what I am doing. I am weighing the current outcomes of my 100 Day Project, now 6 days into the 100 days. I have already been focused for a minimum of 2 hours a day in my studio. I have lost my sense of time passing. I have seen my “mental images” be altered by the media. And I, in turn, have adjusted my carved marks as ideas adjust themselves in a conversation. I have lost myself in the process. I’ve traveled to another place. The fact that I’m there is no longer a secret. But the next time I re-enter, you will not know where I am! Fourteen Borderland members participated in collaboration with the Marquette Poets Circle reacting to a theme of music. The challenge for the visual artist was to react to words and/or ideas. The medium for the exchange was made possible through the efforts of Janeen Pergrin Rastall who designed an interactive website. As the year progressed, the collaboration grew by increments. If we posted a visual to the website, a poet might write and post something in return. It was a virtual conversation. On reception night, after an hour of visual grazing in the gallery, all participants faced one another in a circle, introduced themselves and spoke briefly. As if removing masks, with identities revealed…poets and artists began a new round of conversation! Highlights for me included: 1. there were challenges to create along new avenues. 2. This was an open-opportunity to submit any number of pieces in any media, without size restrictions in a non-juried atmosphere. Time and effort were our only limits. 3. I feel the question was answered, “Does my work affect change outside of myself? “

There may be another opportunity to see this exhibit, hopefully using Bay College West in Iron Mountain as a venue. If it does occur, I hope the Borderland Artists and Marquette Poets Circle will experience a renewed energy and hopefully add new work to the exhibit…there is yet more to say!

I owe a huge thanks to the spirit and soul of Genean Granger who introduced us to the Marquette Poets Circle; to Stella Hansen local member of the Poets’ Circle; and, to the Peter White Library who provided the open space of the Huron Mountain Gallery from June 1 – July 26, 2019.

The exhibit’s website and its interactive display, the on-going communication between 31 individuals, as developed by poet Janeen Pergrin Rastall is still available for viewing at the following link. https://janeenpergrin.wixsite.com/borderlands 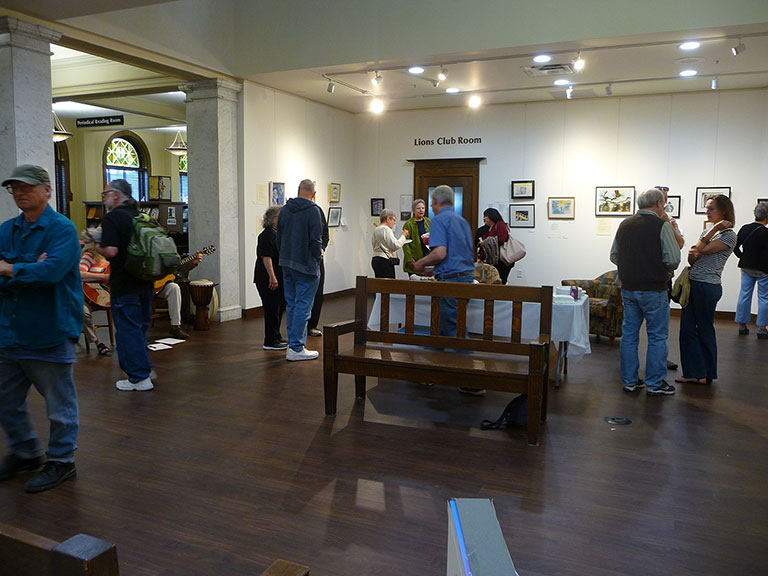 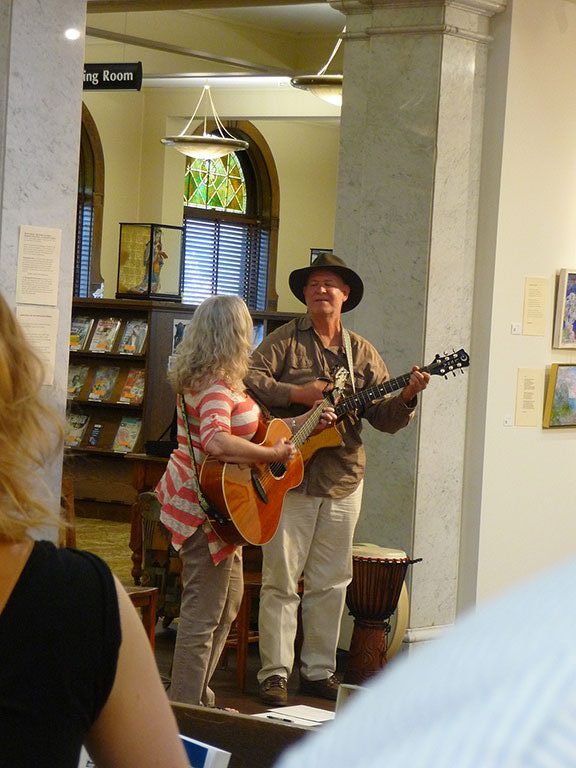 What do poems and paintings have in common? What happens when poets wrestle with images created by visual artists, and visual artists listen to the word images spoken by poets? For the months of April and May Borderland members sought answers to these questions, creating new visual images and new poems as a result. We are deeply appreciative to local poets Genean Granger and Stella Hansen who were willing to share their poetry, discuss differences in writing style and commonalities with the visual arts.

Genean Granger lived with a mixed media composition, “the Unfinished Laundry Line” by Melisse Carr, and wrote a poem, a portion of which follows.

“Cascading colors: poppy, lime, blueberry, and apricot catch my eye.
They jockey for position, “me” first, “no me” first, “no” pick me.
I taste their colors, as they peek-out from windows in my mind.
Unfinished art hangs high on a taut gray clothes line.”

Using the same process of “call and response, as a folk singer leads an audience, Stella Hansen’s poem “the Calling” begs me to see through the empty windows in the sandstone relics at Fayette State Park. I want to pick up my brush and respond to the gull…”what secrets do your walls echo?” or “who lived here”. More importantly, my imagination picks up on the poet’s last line, “the changes come to all of us, she (the gull) mutters and turns to face the sun.”

After an evening of sharing like this, there are hours of studio work that can be gleaned.

THE CALLING by Stella Hansen

The shell of your life is faded yet sturdy

structure that has given itself to time.

The sky abides and waits.

The life within your walls has let go now,

The opening has rebuilt your spirit.

Who were you? What secrets do your walls echo?

The gull lights for a rest in the sunshine

Who lived here she asks? 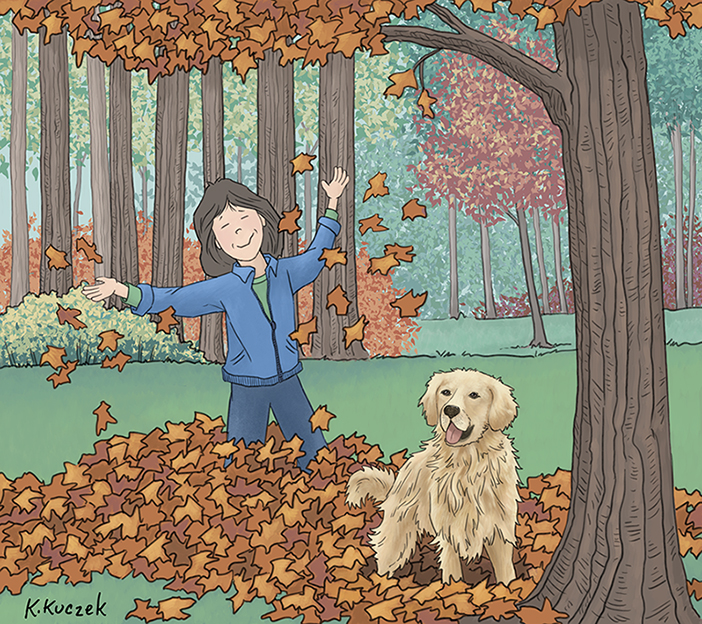 Not sure how it began, maybe it was patent leather shoes that were too tight for my growing feet. Or it was the petticoats that scratched and chaffed when I sat down. “Go have your Dad tie the bow” religiously every morning I’d report to my father who would tie the sash bow of my dress behind me. I hated dresses and petticoats and all that they stood for.

Then came the combing – snarls, and snags and pulls. “stand up straight” “Look up now.” Okay, did you brush your teeth? Time to go now, the bus would be here soon. Out now hurry ..

From there it was taunts and teasing on the yellow school bus. Having to begin my day of sitting. Sitting in school, trying to learn, the teachers exasperated sent me over and again out to the hallway. One face stands out: Mrs. Edwards – grouchy, ugly and so terribly fed up with me.

“Out in the hall” I’d stand till she would come out. Her eyes blazing as she grasped me by both shoulders – shaking me back and forth.. How I had better learn to keep my mouth shut and quit talking and sit still.

I resented it all. The sitting still, the “act like a lady” talk, the petticoats, and frilly dresses that needed some grown up to allow me in and out like a dog on a short leash.

Finally it was bus time and the first one on was always the last one off. Most days there was our sweet Golden Retriever waiting for me and we would tumble after one another home.

Then there was freedom: woods, play clothes and dirt and the most humongous leaf pile from the golf course across the road. There in a mountain of leaves and grass the earth was warm and filled with lots of worms, my friends. The worm patch, the woods, the leaves.

There was no manicure here. Only squirrels, and birds, my dog and myself. This refuse was my refuge 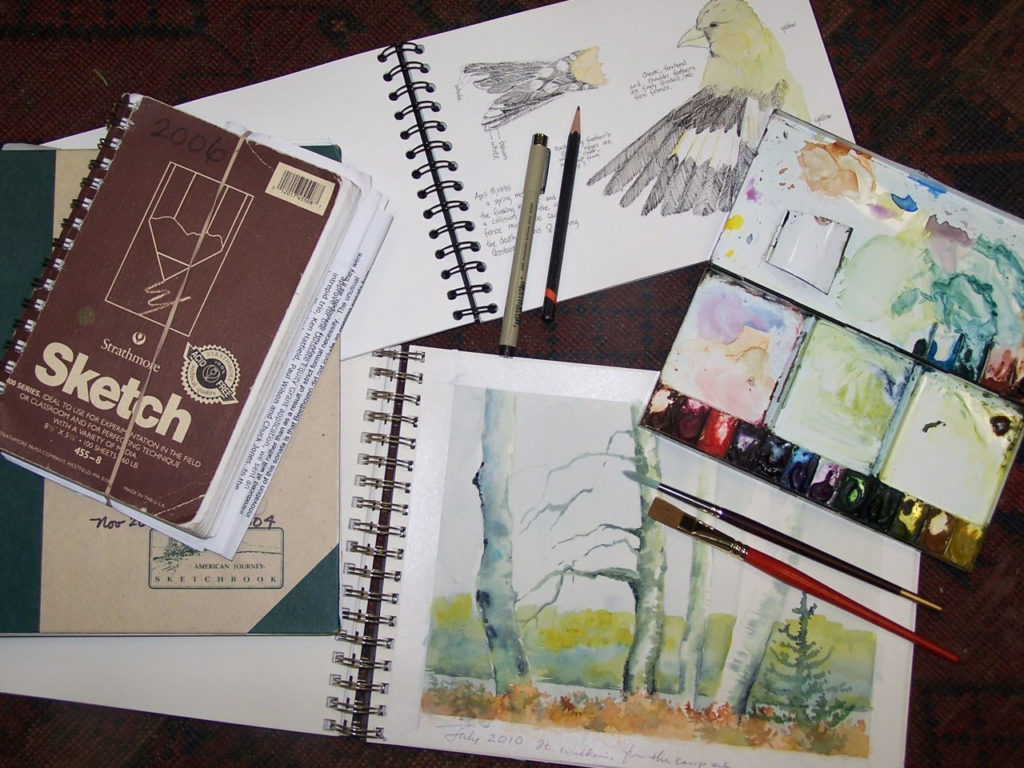 I have a confession to make…I have a habit I am not willing to kick!

It’s both relaxing and challenging. If I’ve been away from it…upon returning I feel becalmed! When I settle into my habit after an absence, I say…”now the real vacation begins.”

I can’t really say how long ago it was that the first tenuous marks in a blank book evolved into the repeated act of journaling in a sketchbook: observing and reflecting, drawing and/or painting. But sometime around 1980, when my family moved to the feet of Mt. Washington in Northern New Hampshire, I had already stuffed my sketchbook into a backpack with pencils, pens, and watercolors, camera and binoculars. The backpack became my traveling studio for day use and foot travel, on the Appalachian Trail, in the Boundary Waters, in Algonquin Provincial Park and the Sylvania Wilderness; in a canoe or at my feet in our pickup truck. The bottom of the original backpack has long worn through and the pack replaced. Multiple journals are now a record of where I’ve been, what I’ve seen and sometimes, personal reflections. Now, as the years and the books pile up, I revisit the pages and feel closeness to friends now past or hear the sounds of waves, of birds or the wind in the trees of northern Scotland, Canada, and the U.S. east coast to west. The books are also a record of my exploration with various art media. Somewhere along the way, I declared a rule not to tear pages out of the books, that’s when I discovered gesso which enabled me to recover an otherwise hopeless start! This habit of maintaining sketchbooks has created a family resource, from solving such riddles as “when did we travel there last” to harvesting sketches for creating gifts. This habit keeps my mind focused on the ever changing landscape…there is never a dull moment. So…

What do I grab when I go even for a simple trip? Yup…you got it…my traveling studio, because I never know what I might see that needs to be remembered!